The Thrill of Victory - The Agony of the Console

- text and photos by Rod Travers

If you look at a Grand Wagoneer from the late 80’s, you might think it’s a fairly modern vehicle. It has square headlights, plush appointments, and even “keyless entry” – a.k.a., remote door locks. The visual design is classic – a testament to famed industrial designer Brooks Stevens. However, if you remove the front grille from a ’91, you will see the same headlight surround stampings that they used in 1963. The mechanical underpinnings for the Grand Wagoneer went largely unchanged from its debut in 1963 through 1991 – 28 years – when the last Grand Wagoneer rolled off the line in Toledo, Ohio. This thing is truly “vintage” underneath. The resulting mish-mash of mechanical updates and cosmetic grafting are part of what gives the GW its charm – and its prodigious gremlins.

Those gremlins create a lot of frustration (“before it’s fixed”) and satisfaction (“after it’s fixed”) for GW owners. Thankfully, “before” and “after” pictures can be rather therapeutic for declaring victory over a gremlin. They’re great for showing a stark contrast between two points in time. Us car people love these kinds of pictures. Like a picture of a rusty car before a new paint job, and then a second picture showing the same car looking brand new. Yet such pictures gloss over the time, money, labor, frustration, irrationality, despair, and a dozen other things that are endured during that amorphous time between “before” and “after.”

Here we have the overhead console from a 1991 Jeep Grand Wagoneer. That little dark glass window near the bottom of the picture should be showing the outdoor temperature in either imperial or metric degrees, along with the cardinal and intercardinal compass points indicating direction of travel. I’m trying to use fancy terms here to justify what took place between “before” and “after.” As you can see, the display is discouragingly blank.

These consoles are notorious for failing as every Grand Wagoneer owner knows. And they are getting increasingly hard to find in salvage yards and online. Chrysler also used these in countless minivans and Jeep Cherokee XJ’s, but functioning ones are nonetheless hard to find. So your best bet is to try and fix the one you have. Or, more rationally, just live without knowing the outside temperature and direction of travel. Who really cares what the temperature is?

But as every car person knows, we just can’t just let things like this go. We want these things to light up like they’re supposed to. So one fine day on a whim I disassembled the console. Inside I found a dusty circuit board with way more wires and connectors than should be necessary. I reseated the connections, blew out the dust, polished up the screen, and put it all back together. And….nothing. I told myself to forget about it.

But with the gravitational pull of this antiquated console clouding my mind, within the hour I was checking the forums and found there is “a guy” in New Jersey who fixes these things. Details were scant but I read that you find the guy by searching for an obscure screen name on Ebay. Sure enough, there he was. But his site was alarmingly minimal. It just said you pay the fee up front, mail the circuit board to him, and he’ll fix it and send it back. Sounded fishy but with that blank display hounding me, I hadn’t been sleeping well so I had to take the chance.

I paid the fee and mailed it off. Weeks went by…nothing. So I sent a “message” via Ebay to the guy in Jersey. Everything on Ebay is anonymous so I had no idea who I was messaging. “Just checking in…no rush,” I said. I was being polite in case it was a relative of Tony Soprano. Nothing. Now my sleep was suffering again, worried that I had been hoodwinked into paying someone to abscond with my rare console, and I’d even paid the postage!

Then a few days later I received an Ebay message from the guy. “I’m working on it. I’ll be in touch.” Days went by. Then another message. “I’m reconstructing some of the conductor traces on the circuit board. Evidently there was a small fire in the console of your Jeep, and part of the board was damaged. No problem though.” Well I think a fire in the console IS a problem, but I can live with it if I can just know the outdoor temperature and my direction of travel.

A few weeks later the repaired circuit board arrived. Sure enough the traces were repaired and fresh insulating epoxy was covering all the new conductors. Fancy terms again. I was stunned at the amount of work he’d done. Who does board-level repair anymore? Well, I know the screen name of a guy in Jersey…

I reassembled everything and put the console back into the headliner. I thought about calling a family meeting so everyone could enjoy seeing the display light up after years of dormancy. But my wife doesn’t care about the outside temperature and my kids moved out of the house when my eccentricities about such things worsened, so alas there was no audience. I fastened my seatbelt, started the car, and prepared for a long, data-filled test drive. And….nothing. 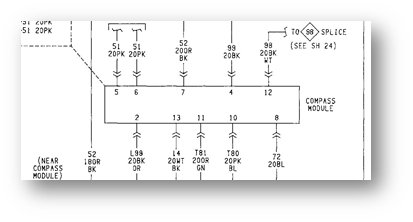 After some hours of dark despair plus a number of cold beverages, I got out my voltmeter and the Jeep wiring diagram for the console. This particular wiring diagram tells you the color of the wires and their position on each of the four connectors feeding the console. What it doesn’t say is what the wires are for. And I’m colorblind. For real.

Back to the forums, where some poor soul had traced and labeled everything-probably just as his kids were hurriedly moving out. I tested every wire and they were all working as designed. I bench-tested the circuit board, and it too was working. I even got to see the display light up.

I was delighted to know that the circuit board was oriented northeast when I was bench-testing it. But when I put everything back in the Wagoneer, the display was again stubbornly blank. More beverages. 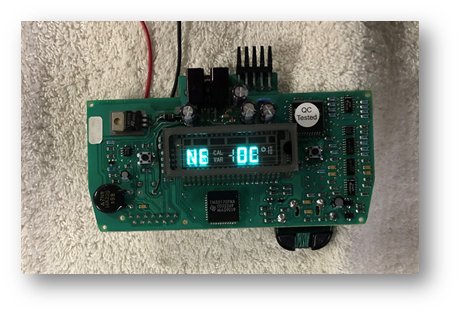 Then I built a breakout box of sorts, which would allow me to indirectly connect the console to the car and test it in place. In effect what I built was a 10-conductor extension cord, complete with male and female terminals, which would allow me to connect and disconnect one or more wires at will. Theoretically this would reveal whatever flaky circuit wasn’t working when the console was connected to the car.

After connecting everything and somehow not starting a new fire, I turned the key. Sunbeams shone down from the sky, a choir sang out in harmony, and the display lit up. The outside temperature was 77 degrees (Fahrenheit) and the Wagoneer was facing south. Partial victory after two maddening days!

It shouldn’t have worked. All I did was add an “extension cord” to the main connector, which should probably have created new problems but instead it made the display work properly. Perplexing. So I removed my extension cord and reconnected everything directly. And….back to nothing.

After another day of diagnostics, it turns out there was a flaky connection on pin 12 of the main connector (yes, pin 12 even though there are only 10 wires). For some reason when plugging it directly into the board, it wasn’t making a good connection even though the conductors were freshly cleaned and they were definitely solidly touching. But when I used a wire to indirectly connect the board to pin 12 on the connector, everything worked. So I fashioned a thin piece of copper and slid it into the socket for pin 12 to create a tighter fit. When I reconnected everything, it all worked. Total victory after three days! Yes, the story has a happy ending with this “after” picture.

Photo Caption: The “after” picture

Although I’ll never get those three days back, now from the sofa-like comfort of my Grand Wagoneer, I can tell you exactly what the outside temperature is, and I can tell you what direction I’m headed. And I can instantly switch from Fahrenheit to Celsius. Who needs an iPhone when I’ve got this dot-matrix era console? Now, if I could only figure out why the cruise control adds 10 MPH when I set it…

All New Wagoneer Coming in 2021
Jeep recently announced it will debut an all-new Grand Wagoneer in 2021, with a price tag nearing $100,000. That would probably boggle the mind of those who launched the original Wagoneer all the way back in 1963. Read more at www.jeep.com.